Glenveagh - head of the glen down to the lake
Letterkenny
Ramelton

The double bass player playing at the Bridge Bar, Ramelton after dinner & drinks with Anita & Don

Driving home in the rain from Ramelton listening to Serial

Watching the Enfants Terribles swimming at Killahoey while reading my book

Being welcomed to The Rappa, Church Hill, Donegal

Meditating on the beach at Rush during my run 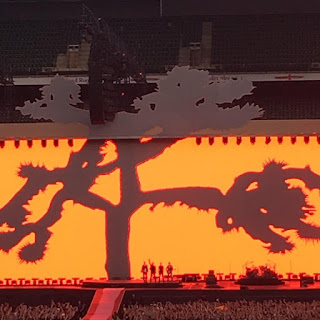 (Whole of the Moon)

Sunday Bloody Sunday*
New Years Day
Bad (with "Heroes" and "Where Are We Now?" snippet)
Pride

Joshua Tree LP
With or Without You**

I Still Haven't Found What I'm Looking For

With or Without You**

Trip Through Your Wires (with "Love Me Do" snippet)

Mothers of the Disappeared

Beautiful Day (with "Starman" snippet)
Elevation
Vertigo (with "Do You Remember Rock'n'Roll Radio?" and "It's Only Rock 'n' Roll (But I Like It)" snippet) (Uno Dos Tres)


"Fans attending The Joshua Tree Tour 2017 night two in Twickenham enjoyed a slightly different set from last night. There were more than 10 different songs snippets featuring band favorites David Bowie, the Beatles, the Ramones, and the Rolling Stones.  Both Stella and Mary McCartney were given shoutouts from Bono, which explains why there were so many Beatles snippets.
"Mysterious Ways" made its European leg tour debut as another female fan was brought onstage during the song.
During "I Still Haven't Found What I'm Looking For," Bono praised Alice Wroe for the HERStory project. Ahead of "One Tree Hill," Bono remembered both Greg Carroll and actress Natasha Richardson, acknowledging that her mother, Vanessa Redgrave, was in the audience. Bono also thanked "on behalf of the entire nation" Brian Eno: "Let me say this off script: There wouldn't be side 2, and there wouldn't be a side 1 if it weren't for Brian Eno, who's here tonight.

Bono dedicated the show to the people of London and to the heroes of the London Fire Brigade. He also thanked his cousin, AJ Rankin, for being one of his heroes as he "always has my back.

The next show is in Berlin on Wednesday."

Michael Grade - outside House of Lords