Chat over lunch with Gia about apocalypse, zombies and stuff

Breakfast with Lydia after both coming from EF by coincidence - talked about creativity, design and stuff

Watching Exodus with N on a rainy afternoon

Going for a run after a gap of a few days

A bath with new bath salts 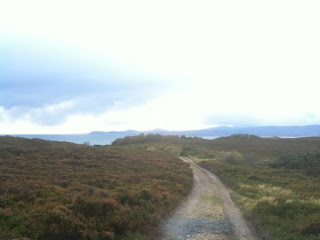 “He likes the country life.”

On the summit of Howth Head this afternoon I read the last page of Ulysses which is in my pocket (thanks to these new phones). It ends with the Yes of Molly taking Bloom’s hand in marriage. When I took Una’s hand I rejoiced in gaining four sisters. I’m down to three now and just (an hour ago) took my leave of another one – for ever.

The sea from Ben of Howth was crystalline green, a perfect palette with the blue-grey hills beyond and the grey-tinged-with-purple rain clouds. The rain had crept up behind me from the city like a dark desert storm as I drove round and up the Head but by the time I parked up it had passed over and left a fresh sheen along the track. I speculated where Molly and Bloom may have left the main path and found their private space among the rhododendrons – I came up with a convincing hypothesis overlooking the golf course. The winbushes were still tinged with a hanging-on-in-there yellow and the odd other bloom punctuated the classic Irish countryside.

“He likes the country life” she tells her two friends, both Dubs from the hospital where she worked. I left the hill with my heart soaring like the seagulls down on Howth pier, which come in for landing like a Harrier, perfect control in the strong sea breeze as they land on the concrete edge. When I got to the end of the pier I came across the plaque commemorating the landing of The Asgard. Strange to have received a Tweet recently from Erskine Childers (the great-grandson). His great-grandfather’s exploits at Howth Head fused with The Riddle of the Sands which struck a Romantic chord with me is another facet of loving this old country I married into.

Talking to her friends she returns to her old self – Feisty is the word that springs to mind, Spirited, her own self. As I look at her profile there’s something so distinctive and endearing in that lower lip, and heart-breaking. If I hadn’t ended up with Una, Bernadette always struck me as the next best thing, closest in looks, also beautiful red hair, though hers darkened over time. She’s got the same dark masculine eyebrows, even more so, which capture her strength and determination.

She’s over in Raheny now, a couple of miles down the road. I’m in her own manor, Clontarf. A couple of the longest miles ever. She’s been very patient with me over the years, way more than I’ve been. I liked just being around her. She’s a force of Yes. 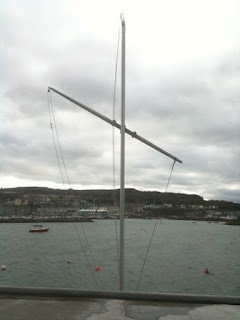 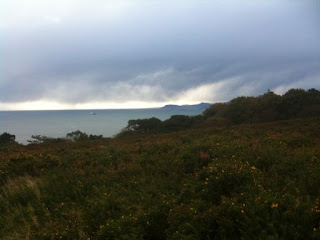 Lunch with the Enfants Terribles at Dan's Cafe, Carlingford

Dinner at Clontarf Castle with U, Elizabeth & Deirdre